6 time where cricket matches were stopped for unusual reasons

During the Ranji Trophy match between Delhi and Uttar Pradesh, a man drove his car into the stadium and completely ignored the umpires and players asking him to stop. Fortunately, no one was hurt and the match referee deemed the pitch to be playable. This was the second security breach at an Indian cricket ground in a span of two weeks.

One cannot imagine that the match would stop due to a long lunch break. Lunch was delayed by 10 minutes during the second Test between South Africa and Bangladesh after the delivery of halal food for the visiting team was delayed due to an incorrectly printed menu by the caterers. 256 runs in the first two sessions as South Africa’s top order continued to blow the Bangladeshi bowlers away.

A fire alarm stopped the play

Australia’s local cricket team, New South Wales, needed 18 runs to win, but batting was halted for about 30 minutes after a fire alarm went off at Allan Border Field in Brisbane. Later, it was revealed that one of their own players was the cause of the delay. Australia’s star off-spinner Nathan Lyon had burnt a piece of toast prompting fire trucks to come to the ground.

The sun stops the drama

There was an incident in a recent India vs New Zealand match in Napier where play was stopped due to heat. The sun was shining directly into the batsman’s eyes. He asked everyone to sleep on the floor. Shortly after, the bees disappeared from the stadium, wasting at least 30 minutes of the game. However, it was one of the memorable events of the game. 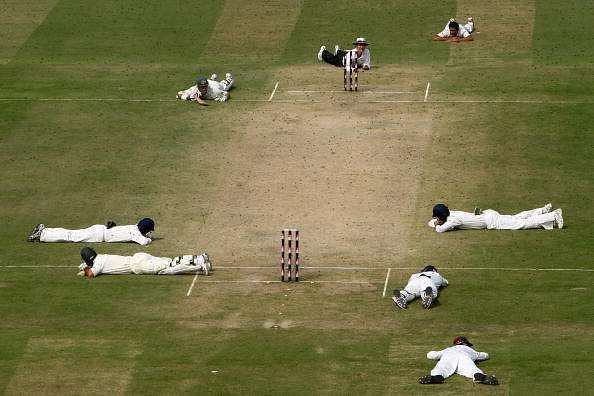 In the Provident Trophy semi-final, 2007, the match between Derbyshire and Yorkshire had to be abandoned due to extreme heat and sunshine. Chasing 254 in the day-night match, the Derbyshire batsmen complained that they were having problems seeing the white ball in the sunlight. The game was stopped for 45 minutes. Yorkshire eventually won by the Duckworth-Lewis method.

In 1965 Edgbaston Test between England and New Zealand was bitterly cold and Warwickshire CCC was smart enough to serve coffee during the game twice that day. However, the game did not stop.